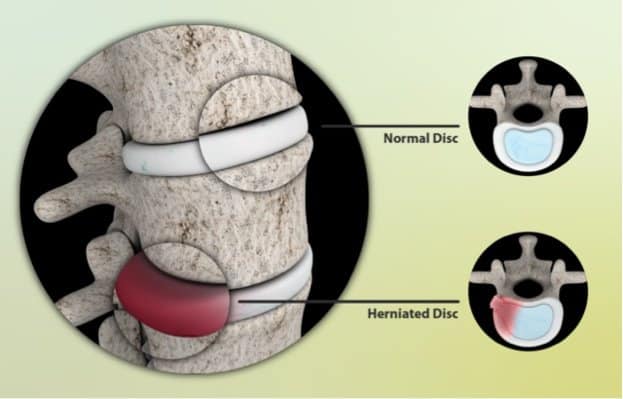 After a rupture, a jelly-like material leaks out of a herniated disc, causing inflammation and pain. The injury is usually treated one of two ways: a surgeon sews up the hole, leaving the disc deflated; or the disc is refilled with a replacement material, which doesn’t prevent repeat leakages. Each approach on its own isn’t always effective.

A collaboration led by Cornell University professor Lawrence Bonassar combined these two methods into a new two-step technique that results in a “patched” disc that maintains mechanical function and won’t collapse or deteriorate.

“This is really a new avenue and a whole new approach to treating people who have herniated discs,” Bonassar said.

“We now have potentially a new option for them, other than walking around with a big hole in their intervertebral disc and hoping that it doesn’t re-herniate or continue to degenerate. And we can fully restore the mechanical competence of the disc.”

Bonassar’s research group seeks engineering-based solutions for degenerative disc disease. Over the last decade, the group has developed a collagen gel that incorporates riboflavin, a photoactive vitamin B derivative. Instead of sewing up a ruptured disc, the researchers can patch it by applying their gel and shining light on it to activate the riboflavin.

The resulting chemical reaction causes fibers in the collagen to bond together and the thick gel stiffens into a solid. Most importantly, the gel provides a more fertile ground for cells to grow new tissue, sealing the defect better than any suture could.

The technique only takes five or 10 minutes and can be applied in conjunction with a discectomy, the hourlong procedure by which the leaked nucleus pulposus is removed from the nerve root. The technique could be used to address other types of disc degeneration, or integrated into other spinal procedures and therapies.

The study was published in Science Translational Medicine.

Materials provided by Cornell University. Content may be edited for clarity, style, and length.