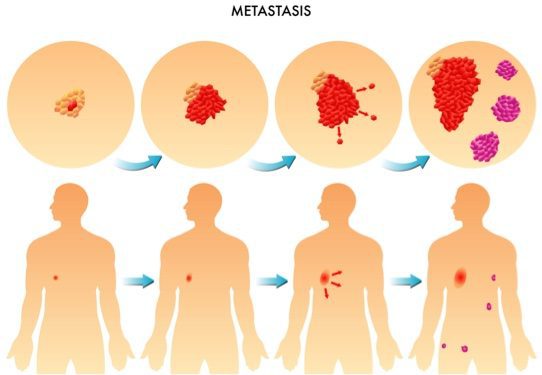 What role do the lymphatic vessels play in the metastasis of cancer cells? Scientists from the German Cancer Research Center and the Mannheim Medical Faculty of the University of Heidelberg developed a method to investigate this question in mice. The aim of the work was to identify new ways to block the dangerous colonization and spread of tumor cells. The researchers discovered that an antibody against a signaling molecule of the vascular system causes the lymphatic vessels in the tumor to die, suppresses metastasis and thus prolongs the survival of the mice. Based on these findings, approaches may be developed to prevent the dangerous spread of tumor cells. The results have now been published in the journal Cancer Discovery.

Just like healthy tissue, tumors are supplied by two different vascular systems. In addition to blood vessels that supply oxygen and nutrients, the lymph vessels are responsible for transporting cells of the immune system and tissue fluid. The ability of cancer cells to spread through both pathways in the body and form daughter tumors, so-called metastases, has been known for a long time. In this work, the importance of the route via lymphatic vessels and the biological mechanisms involved were investigated for the first time in mice.

Until now, it has been difficult to study the complicated architecture of a tumor and its spread in a living organism. The Heidelberg and Mannheim research team led by Hellmut Augustin has now succeeded in developing a suitable model system, as Nicolas Gengenbacher, first author of the current publication, reports: “The key to this was a direct transplantation of tumor tissue from one mouse to another without prior cell culture. In this model, the natural tissue structure was preserved and the cancerous tumors were able to form functional lymph vessels that were connected to the lymphatic system – a prerequisite for lymphogenic metastasis”.

Using these animals, the researchers were able to confirm that cancer cells often migrate via the lymph vessels first into nearby lymph nodes and from there continue to metastasize into vital organs. The surgical removal of the primary tumor enabled the researchers to simulate a disease situation that corresponded to that of a cancer patient after surgery: Daughter tumors and not the primary tumor became crucial for survival.

In their search for ways to prevent the development of metastases, the research team focused on the cells that line the lymph vessels from the inside, the so-called lymph endothelial cells. Endothelial cells control many important properties of the blood and lymph vessels and produce numerous signaling molecules and growth factors. The researchers found that the messenger substance angiopoietin 2 ensures the survival of lymph endothelial cells in tumors. An antibody that blocks angiopoietin-2 caused the lymph vessels in the tumor to selectively die. This interrupted the transport pathways for cancer cells to detach and prevented them from spreading to nearby lymph nodes. As a result, fewer daughter tumors formed in distant organs and the mice survived significantly longer.

Malignant cells often remain in the body after cancer surgery and can be the starting point for a relapse of the disease. “Surprisingly, we were able to effectively prevent the spread of tumors in the mice even when we blocked angiopoietin-2 only shortly before tumor surgery,” says Hellmut Augustin, head of the study. “However, we have only been able to show that angiopoietin-2 blockade has a therapeutic effect within this treatment window in experimental animals. Whether this approach also helps in humans against the spread of tumors must be clarified in further investigations.”

Materials provided by the German Cancer Research Center (Deutsches Krebsforschungszentrum, DKFZ). Content may be edited for clarity, style, and length.