COVID-19 patients on ventilators can have permanent nerve damage 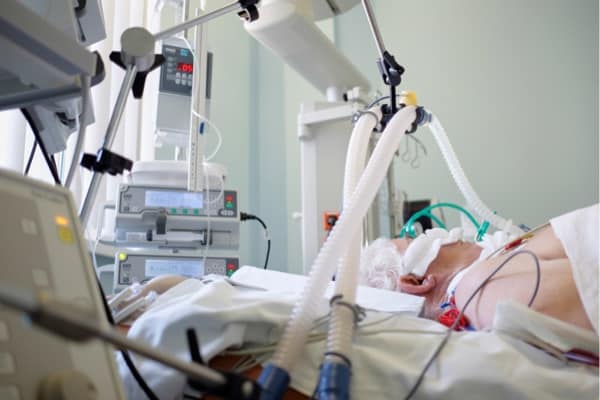 Severely ill COVID-19 patients on ventilators are placed in a prone (face down) position because it’s easier for them to breathe and reduces mortality. But that life-saving position can also cause permanent nerve damage in these vulnerable patients, reports a newly accepted study from Shirley Ryan AbilityLab and Northwestern University Feinberg School of Medicine.

Scientists believe the nerve damage is the result of reduced blood flow and inflammation. Other non-COVID-19 patients on ventilators in this position rarely experience any nerve damage.

The study has been accepted by the British Journal of Anaesthesia. It can be viewed as a preprint.

“It’s shocking how big a problem it is,” said lead investigator Dr. Colin Franz, a physician-scientist at Shirley Ryan AbilityLab and an assistant professor of physical medicine and rehabilitation and neurology at Northwestern’s Feinberg School of Medicine. “This is a much higher percentage of patients with nerve damage than we’ve ever seen in any other critically ill population. Ordinarily, very sick people can tolerate the position that helps their breathing. But COVID patients’ nerves can’t tolerate the forces other people can generally bear.”

Based on this study and another that came out after Franz’s, 12% to 15% percent of the most severely ill COVID-19 patients have permanent nerve damage. Based on the number of COVID patients worldwide, Franz estimated thousands of patients have been impacted.

“It’s underappreciated if you take our numbers and extrapolate them,” Franz said. So far, he and colleagues have seen 20 patients from seven different hospitals with these injuries.

The injury has been missed because people who have been critically ill are expected to wake up with some generalized, symmetric weakness because they have been bedridden, Franz said. But the pattern of weakness in the COVID-19 patients caught the researchers’ attention during rehabilitation since quite often an important joint such as the wrist, ankle or shoulder would be completely paralyzed on one side of the body.

As a result of the findings, physicians are modifying the prone position protocol for COVID-19 patients at Northwestern Memorial Hospital in order to prevent nerve damage.

“We noticed patients are getting a lot of pressure at the elbow or at the neck, so we’ve made some adjustments to the way we position the joints as well as putting extra padding under the elbow and the knee where there is the most pressure,” Franz said.

The most common injuries are wrist drops, foot drops, loss of hand function and frozen shoulder. Some patients had as many as four distinct nerve injury sites. Some people who are dragging a foot need assistance with walking such as a wheelchair, brace or cane.

Franz and colleagues have been doing some therapeutic nerve stimulation, which has shown in other work to help regrow nerves. Franz collaborates on this line of research with John Rogers, a biomedical engineer at Northwestern’s McCormick School of Engineering, and Dr. Sumanas Jordan, an assistant professor of surgery at Feinberg and Northwestern Medicine plastic surgeon.

But many patients have pre-existing conditions that interfere with nerve regeneration, such as diabetes mellitus, so they are less likely to recover full function.

“This could mean permanent difficulties with walking or critical hand functions like writing or operating a computer or cell phone,” Franz said.

The multidisciplinary team of scientists at Northwestern and Shirley Ryan AbilityLab are working on a pressure map of hot spots for nerve sensitivity, radiology imaging to document the injury, and skin sensors to help identify better “prone” position strategies.

Materials provided by Northwestern University. Content may be edited for clarity, style, and length.