Chemotherapy sometimes set the stage for drug-resistant leukemia at relapse 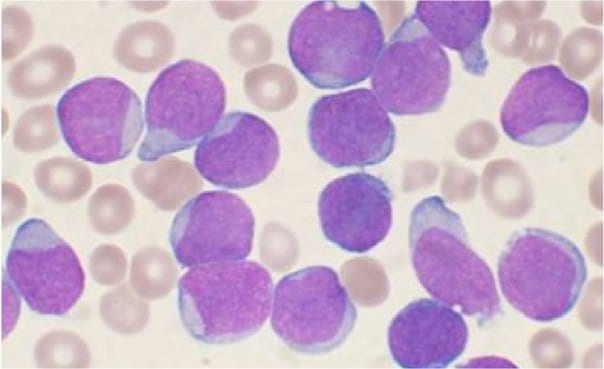 Chemotherapy has helped make the most common childhood cancer one of the most curable, but researchers have evidence that the treatment may also prime some patients for relapse. Results published in the journal Blood reported that treatment-induced mutations cause drug resistance in some patients whose acute lymphoblastic leukemia (ALL) returns.

“Our study reveals the evolution dynamics of pediatric ALL, which suggest for the first time that chemotherapy treatment, particularly thiopurines, can cause mutations that lead to drug resistance in patients,” said study co-corresponding author Jinghui Zhang, Ph.D., chair of the St. Jude Children’s Research Hospital Department of Computational Biology. Thiopurines are a class of drugs used in most phases of ALL treatment.

The study involved 103 young ALL patients who relapsed. Most relapsed nine or more months after diagnosis. The analysis revealed that about 20% of these patients had treatment-related mutations at relapse, some associated with drug resistance. “The mutational signatures are specific and therapy-related, as they are only present in the genomes of relapsed ALL patients but not in other pediatric or adult cancer genomes,” Zhang said.

The findings underscore the need for less toxic therapies and precision-medicine approaches, said co-corresponding author Ching-Hon Pui, M.D., chair of the St. Jude Department of Oncology. Candidates in development include immunotherapies such as CAR-T cells and bispecific antibodies.

“This study points to the potential need to individualize therapy when drug-resistant mutations emerge in ALL”, said co-corresponding author Jun J. Yang, Ph.D., of the St. Jude Departments of Oncology and Pharmaceutical Sciences. The other co-corresponding author is Bin-Bing Zhou, Ph.D., of Shanghai Children’s Medical Center and National Children’s Medical Center and the Shanghai Jiao Tong University School of Medicine.

Relapse remains leading cause of death

ALL is the most common childhood cancer. With current treatment, more than 90% of pediatric patients become long-term survivors. The prognosis is dismal for patients whose leukemia returns. Relapse accounts for 70 to 80% of ALL patient deaths.

While previous studies had identified relapse-specific drug resistance mutations, the origin of those mutations was unclear. Some researchers proposed that ALL relapse was driven by drug-resistant leukemic cells present at diagnosis.

The timeline of relapse of patients in this study and the presence of relapse-specific mutations in the 12 genes involved in drug response provided insight into the cause.

Most patients, 55%, relapsed nine to 36 months after diagnosis but before treatment ended. This group had the most relapse-specific mutations in the 12 drug-resistance genes, particularly compared to patients who relapsed earlier. Mathematical modeling, mutational analysis and other evidence indicated that earlier relapse was likely caused by drug-resistant tumor cells present at diagnosis.

“This suggests drug resistance is not a foregone conclusion,” Yang said. “It may be preventable through changes in the dosage or timing of treatment.” Based on the findings, Pui said screening relapsed patients for drug-resistance mutations may be indicated. 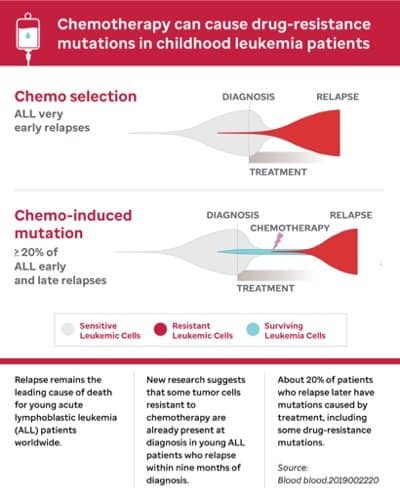 Graphic on chemotherapy-induced mutations in relapsed ALL.

Materials provided by the St. Jude Children’s Research Hospital. Content may be edited for clarity, style, and length.