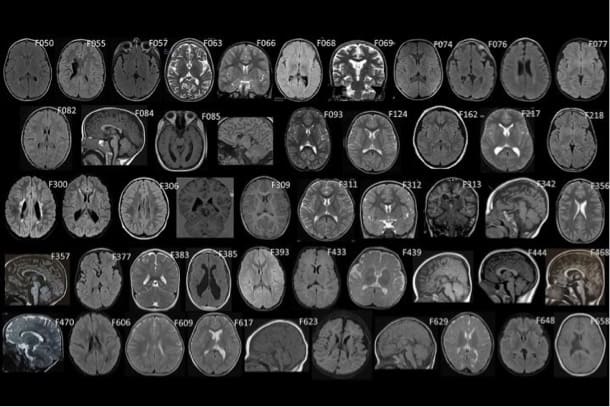 The causes of cerebral palsy have long been debated and often are attributed to in utero infections, premature birth, or brain injury to the baby near or during delivery, usually from a lack of oxygen. But many young children diagnosed with cerebral palsy have not experienced such events.

Now, scientists have identified mutations in single genes that can be responsible for at least some cases of cerebral palsy, according to a new study led by researchers at Washington University School of Medicine in St. Louis, the University of Arizona College of Medicine in Phoenix, and Yale University. The study indicates that many of the mutations occur randomly and are not inherited from a child’s parents. The research is part of the International Cerebral Palsy Genomics Consortium, a global effort to understand genetic causes of cerebral palsy. The new knowledge could help improve the diagnosis of cerebral palsy and lead to future therapies.

The study appears Sept. 28 in the journal Nature Genetics.

The scientists were able to show that introducing mutations of the same genes into fruit flies caused the insects to have movement difficulties that resemble those common in people with cerebral palsy, a common neurodevelopmental disorder. Cerebral palsy can affect gait, balance and posture. It does not worsen over time but varies widely in severity, with some patients able to walk unaided, while others may use walkers or wheelchairs. According to the Centers for Disease Control and Prevention, it affects about two to four children per 1,000 globally.

“This international collaboration allowed us to conduct the largest genetic analysis of cerebral palsy patients and their parents to date,” said Sheng Chih (Peter) Jin, PhD, an assistant professor of genetics at Washington University. “What is exciting about uncovering new genetic causes of cerebral palsy is the potential for the future development of therapies for these patients.”

Researchers have suspected that genetics could contribute to an elevated risk of developing cerebral palsy, but until now, individual gene mutations that can cause the disorder had rarely been identified. To better understand genetic contributions to cerebral palsy, the scientists sequenced the entire protein-coding portion of the genomes from 250 participants — cerebral palsy patients and both parents — seeking mutations that could play causal roles in cerebral palsy.

In particular, the analysis identified two genes — FBXO31 and RHOB — that when mutated are each alone sufficient to cause cerebral palsy. Many of the additional genes carrying mutations were only present in the child with cerebral palsy — meaning they arose randomly — while others were inherited from both parents. In general, the researchers found that many of the genes implicated in cerebral palsy have important roles in the wiring of brain circuitry during early stages of development.

“When these mutations were introduced into fruit flies, they recapitulated what we see in human patients,” said senior author Michael Kruer, MD, of the University of Arizona College of Medicine in Phoenix. “In a nutshell, the flies couldn’t walk. The movement of the flies was greatly diminished, and this was examined in several different ways. We were able to validate that these genes — nearly two dozen of them were tested in the flies — play an important role in neuromotor function and in the biology of cerebral palsy.”

The researchers also noted that some of the genes newly implicated in cerebral palsy have in past research been associated with autism, intellectual disability and epilepsy.

“For some individuals with cerebral palsy, they only have difficulty with movement and have no other disabilities whatsoever,” Kruer said. “But we also see huge overlap among neurodevelopmental disorders. For example, more than half of cerebral palsy patients have some type of learning or intellectual disability. About 40% have epilepsy, and 6% to 8% have autism. So, what we see in the genetics of our new study is reflected in what we have seen in our patients for many years.”

In about 12% of the cerebral palsy patients in the study, the causal genetic mutations were acquired by chance, not inherited from either parent. In about 2% of the patients in the study, the mutations were inherited from both parents, neither of whom had cerebral palsy. The remaining 86% of cases could have environmental causes, or contributions from other genetic variations that will require a larger study to reveal, or a combination of genetic mutations and environmental interactions that the researchers are still working to understand.

“We hope this study can help give peace of mind to parents who may have been told over the years that there must have been some kind of problem during the pregnancy or delivery to cause their child to have cerebral palsy,” Kruer said. “Our study has implications for genetic counseling for parents who have a child with cerebral palsy, in helping determine the chances of a second child being similarly affected.”

Added Jin: “We are continuing to study cerebral palsy patients and their parents, and as our sample size increases, we may begin to be able to measure the contributions from less common recessive and dominant mutations passed down from one or both parents. This study provides clues to where we can begin to design treatments. Our genetic understanding of cerebral palsy is still in its earliest phase — we’ve just scratched the surface with this study. We look forward to continuing this research to better understand what causes cerebral palsy so we can find ways to prevent or treat it.”

Materials provided by the Washington University School of Medicine. Content may be edited for clarity, style, and length.