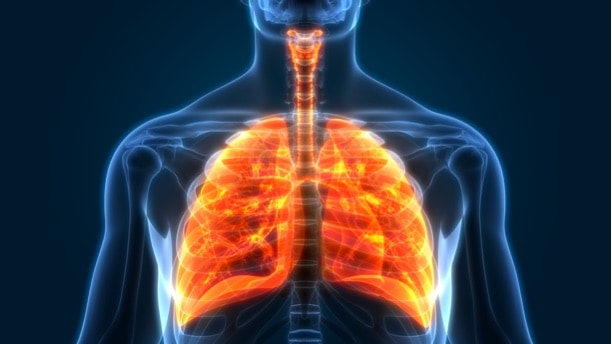 More than half of patients with non-small cell lung cancer (NSCLC) bearing a mutation in the HER2 gene had their tumors stop growing or shrink for an extended time after treatment with a drug that hitches a chemotherapy agent to a highly targeted antibody, an international clinical trial led by investigators at Dana-Farber Cancer Institute has found.

The results, to be reported simultaneously today at the European Society for Medical Oncology (ESMO) 2021 Congress and in a paper in the New England Journal of Medicine, point to an important role for the drug, trastuzumab deruxtecan, in patients with this form of NSCLC, for which no targeted therapies are currently approved.

About 3% of nonsquamous NSCLCs have a mutation in HER2 (also known as ERBB2) – accounting for nearly 6,000 new cases annually in the United States. These tumors, which are more common in people who never smoked than those with a history of smoking, generally have a poor prognosis and frequently metastasize to the brain. While drugs that target the HER2 protein are used successfully in treating breast and gastric cancers with an oversupply of the protein, none has been approved for patients with NSCLC. Such patients, therefore, are generally treated with standard chemotherapy or immunotherapy, which has only limited effectiveness in patients who have already undergone previous treatment.

“Clinical trials of trastuzumab – an antibody drug that binds to the HER2 protein – in combination with chemotherapy have had disappointing results in NSCLC, partly because of the difficulty in determining which patients likely to benefit from the drugs and the rarity of cases in which the protein is overexpressed,” said the study’s senior author, Pasi Jänne, MD, PhD, of Dana-Farber. “Recent research has focused on NSCLC that harbors a mutation in the HER2 gene rather than an overabundance of the HER2 protein. Efforts to treat such cancers with targeted therapies have been encouraging but inconsistent.”

In the new study, patients with metastatic HER2-mutant NSCLC whose cancer was resistant to standard therapy were treated with the antibody-drug conjugate trastuzumab deruxtecan in a phase 2 clinical trial dubbed DESTINY-Lung01. The conjugate consists of a HER2-targeting antibody bound to a drug known as a topoisomerase I inhibitor, which hampers cancer cells from copying their DNA, leading to their death. As a unit, the agents pack precision as well as punch. The conjugate has been approved for the treatment of breast and gastric cancers that overexpress the HER2 protein; in NSCLC, it is being tested for cancers with a mutant version of the protein.

The trial enrolled 91 patients. More than half of them – 54.9% – had an objective response to trastuzumab deruxtecan, meaning their cancer was held in check or shrank. Responses occurred in patients who had undergone a variety of prior cancer treatments and whose NSCLC carried a variety of different mutations in HER2. The median duration of response to the drug was 9.3 months, and the median survival period before the disease began to worsen was 8.2 months. Overall, the median survival of those who responded to the drug was 17.8 months.

The most common adverse effects were nausea, fatigue, and hair loss. Forty-two participants had a drug-related side effect deemed severe or higher; the most common of these were low white blood cell count and anemia.

Twenty-four patients developed interstitial lung disease, or scarring of the lungs, as a result of treatment. Investigators halted trastuzumab deruxtecan in 16 patients and interrupted its use in eight patients because of this problem. Patients experiencing this condition were treated with steroids. An ongoing phase 2 trial is examining two doses of the drug in a larger patient population to determine the impact on both efficacy and side effects.

“In this multicenter international trial, treatment with trastuzumab deruxtecan demonstrated a high response rate and durable clinical benefit in patients with advanced HER2-mutant NSCLC,” Jänne commented. “It shows clear potential as a targeted therapy for this hard-to-treat cancer.”

Materials provided by the Dana-Farber Cancer Institute. Content may be edited for clarity, style, and length.